A Life Changing Experience In Cambodia via Choeung Ek

Cambodia is full of beauty, beaches, architecture, incredible food and a genocide in our lifetime that you never knew about. Imagine right now if 1/4 people in your country died right now… this is what happened in Cambodia in the late 1970s… not in 1872… like in your or your parents lifetime!

I went to Cambodia excited for the white-sand beaches, stir-fried morning glory, Angkor Wat and drinks in paradise. I never expected to come across one of the most emotionally stirring places I have ever visited. Choeung Ek near Phnom Penh is a museum dedicated to the genocide in Cambodia that happened from from 1975-1979 killing an estimated 2-3 million people. You may not know that Cambodia had a lesser known Adolf Hitler and he was in power until 1993!

If you want to read an incredible book or watch movie on it check out First They Killed My Father. The movie is award winning and was directed by Angelina Jolie who has a close connection with Cambodia she adopted her first son Maddox from a Cambodian orphanage on one of her many visits. 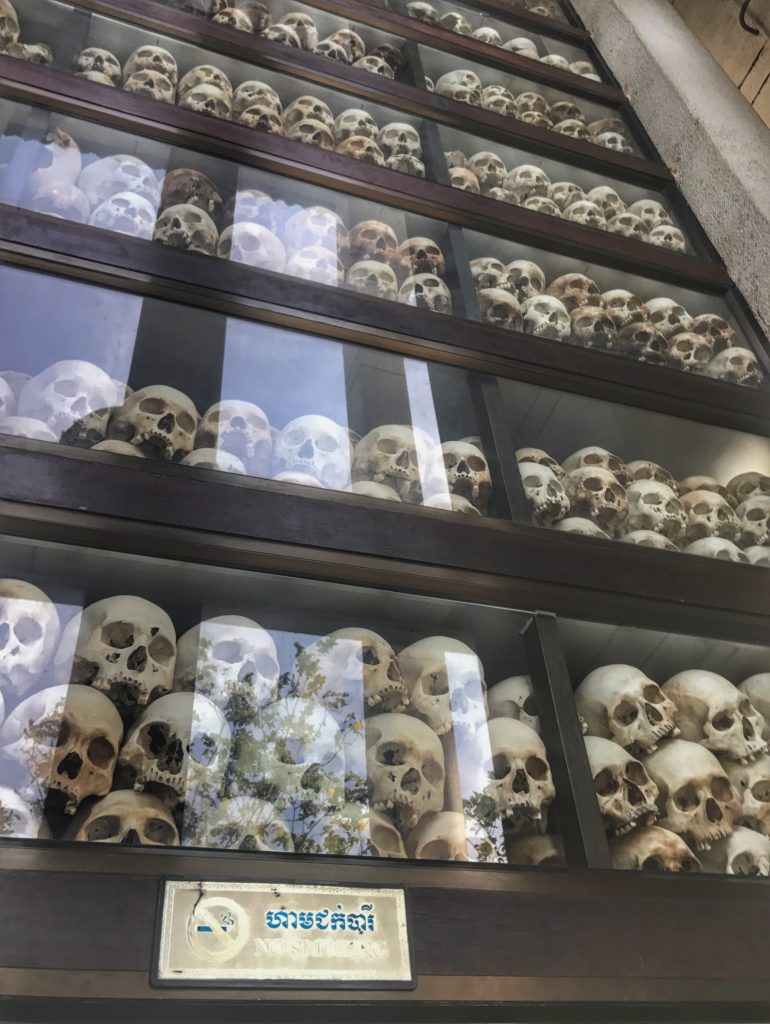 Quick History Lesson On The Genocide

If you weren’t aware, the ruling party of Cambodia Khmer Rouge, killed what is said to be 2-3 million people in a 4 year span, wiping out 25%+ of their population. It was a piece of history I never knew about and I haven’t talked to one person in North America who has. Leader of the Khmer Rouge, Pol Pot went about his own ethnic cleansing to start Cambodia fresh from “year zero.” All foreigners were chased out or killed, religion banned, all communication and media were shut down, money was forbidden and all of Cambodia’s cities were evacuated forcing everyone to work in the “killing fields.” People were forced to work dying from starvation and disease while others were executed. The craziest thing is that until 1993 Pot and the Khmer Rouge were recognized as the ruling government by the United Nations!

(Some of the following material is disturbing, you’ve been warned)

It’s impossible to share with you the mood at this memorial, which is completely silent aside from muffled sniffs and weeping. With all of that said the trip to Choeung Ek had me in awe, humbled and in tears for the entire hour+  was there. I had no idea what to expect as I figured it would be a museum to learn a little history and be on my way… what I saw was heartbreaking and all of this happened essentially in my generation. The hatred, the death and the lack of care for a country by the rest of the world just didn’t seem real. 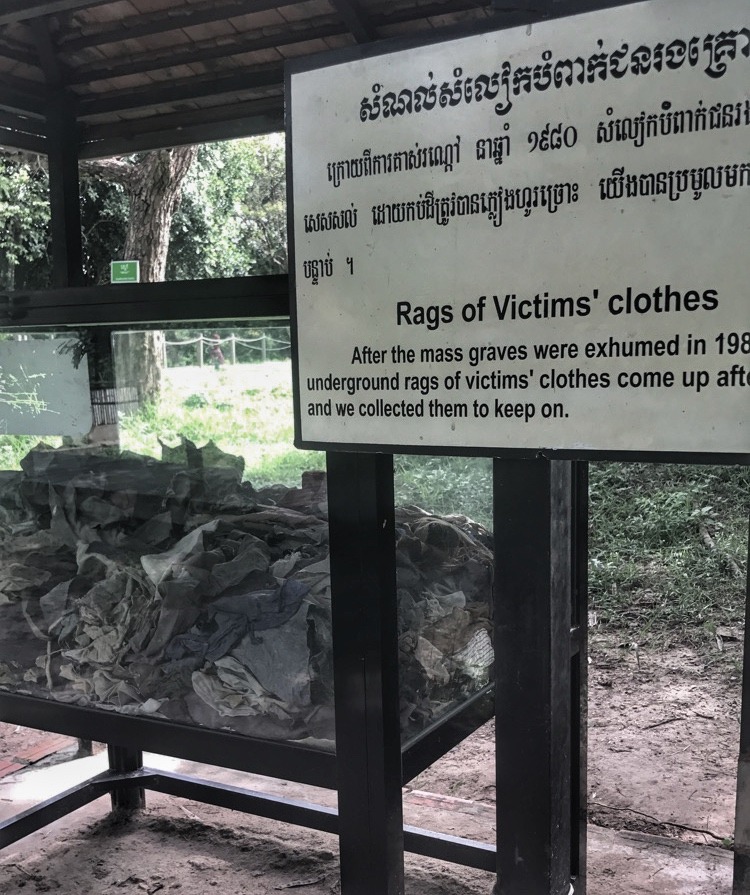 My friend Bobby and I took a tuk-tuk 45 minutes from our hotel in Phnom Penh arriving at Choeung Ek ready to learn more about Cambodia. As we walked in we received our headphones and from there we were transported into a different world. It was obvious from the second you listen to the narrator that this was going to be different… within minutes Bobby and I went our separate ways as emotion was already evident and we strolled the grounds on our own with tingles up or spine, hair standing on end and tears consistently welled up in our eyes. Throughout the walk you are told first-person stories by the main narrator, escapees of the killing fields, from executioners, as well as those who saw their family pass and more. 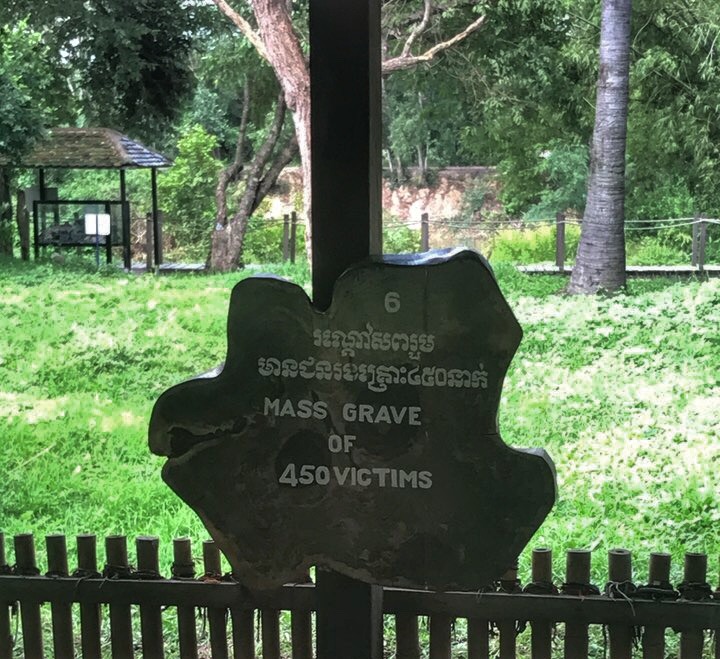 The narrator takes you through to all of the stops on the grounds giving you information on the significance of each area. On the walk many of the mass graves have been untouched and you will see bones and clothing that have become unearthed from the ground over the years. There are buildings where people were chemically killed, forced to sleep on top of one another, torturing rooms and more. You learn that bullets were so valuable people weren’t shot for a quick death… it was torture and slow deaths. They were beaten and hacked to death with whatever was cheap and available – axes, hoes, cart axles, bamboo poles, hammers, machetes… even using the sharp edges of palm tree branches to slice open their throats.

Throughout the walk stories are told by people’s first hand experience and all you can do is listen and weep. “They tricked the prisoners so that during the transportation they did not cause any sort of chaos or chaotic situations … They were told that they were being transferred to a new house. They didn’t know that they were being taken to be executed…. Everything was in secret. Nobody knew.”

You think you have heard the worst until you come across The Killing Tree. I won’t go into detail but the tree was where babies were smashed in the tree as the method to killing them… if they killed the parents they killed the baby as well so there was no revenge… a Khmer slogan was “To dig up the grass, one must remove even the roots.” 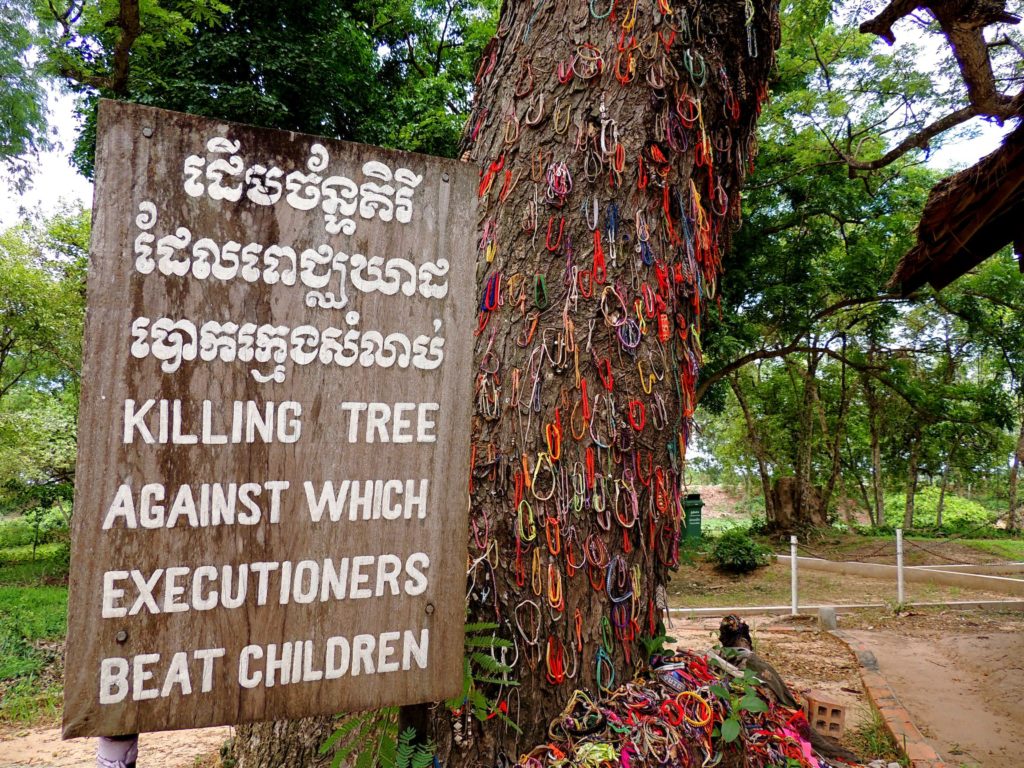 As you find your way over the memorial you will finish at The Stupa, where 8,000 skulls are piled up all displaying how each person was brought to their death. Each skull is labeled with a color to show the method of which someone was killed.

This place broke my heart… only to put it back together knowing just how lucky we are. You aren’t better than anyone else… you just got lucky. You were born when and where you were born but you just as easily could have been born there and then. We get upset about traffic or a restaurant messing up our order… if you see this place you’ll understand life is beautiful and we should be so thankful for everything we have, not everything we don’t have.

Did you like this article? Do you have a story of yours you want to share? Let me know in the comments! 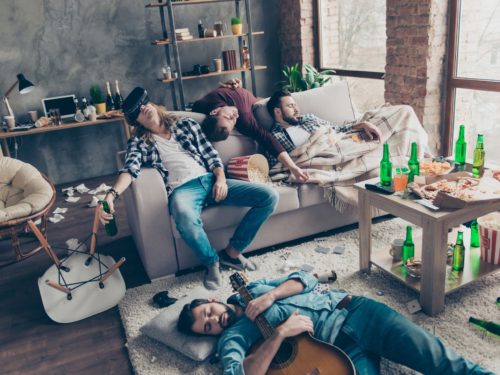 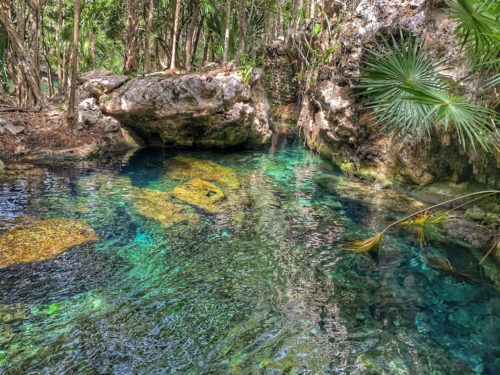 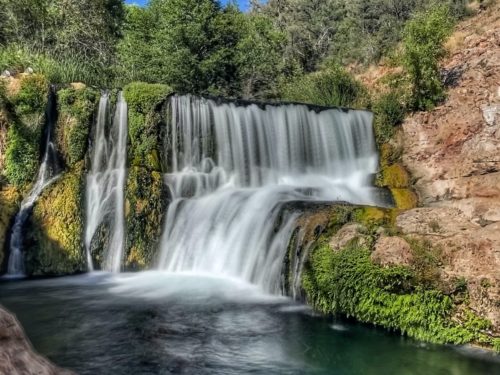 8 Best Hikes Within 2 Hours Of Phoenix